The purpose of the present study was to present an applied model for assessing the faculty members’ capabilities in different fields of study in the humanities and engineering in order to qualitatively promote the faculty members of Islamic Azad University. The research is descriptive and qualitative.  In order to assess the faculty members’ professional capabilities, the previous studies, professors’ and experts’ views were taken into consideration.  It was done through surfing the net and the related databases.  The data collected formed a tool in the form of a questionnaire which consisted of 9 components.  The present and the desired situations were labeled from one to ten and the faculty members chose from one to ten to describe the situation.  The research population comprised all the faculty members of Islamic Azad University in the humanities and engineering who were working during the academic year of 2009-10 out of which 384 were chosen as the research sample.  In order to achieve the desired number of subjects, the first sample comprised 450.  Sampling was done applying the multi-stage method.  In the first stage, 4 zones out of 12 zones were randomly selected simultaneously which appeared to be zones 4, 12, 8, and 11.  In the second stage, out of each zone, from 2 to 4 university branches were randomly selected.  On the whole, the research sample consisted of 276 faculty members.  In order to describe the obtained data, the methods of descriptive statistics were applied which consisted of measure of central tendency, dispersion, and distribution.  The inferential statistics methods consisted of correlation coefficient, single variable regression, t-test, and path analysis.  The results show that there are differences between the present and desired situations related to the following components: 1) philosophy and purpose, 2) management strategies, 3) Clarification, 4) the development of participation, 5) information technology, 6) human relations, 7) metacognition, 8) evaluation and repeated engineering system, 9) the stages of executive framework.  Regarding the third research question, using the Cronbach’s Alpha formula, each obtained result along with the total score of each component were shown while the coefficients of correlation which were statistically significant were omitted and as a result 36 statements out of 53 were chosen.  In order to assess the capability model of faculty members, the concurrent regression analysis was applied.  The related diagram shows that the 3 components of human relations, evaluation and repeated engineering system, and the stages of executive framework has significant relationship with the model, and the component of clarification has a negative relationship with it.  In order to test the validity of the model, it was given to 11 experts in the field of educational administration, and it was confirmed by 90% of them. 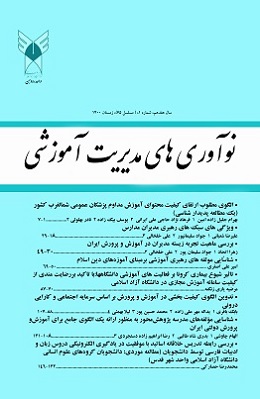